2015, An exiting time to live in. It’s only recently that Belgium is pushing for open data for the government, an “Open Government” if you will.

At first I wanted to reverse-engineer the “De Lijn” mobile API, however it recently came to my attention that they are seemingly investing in a newer, more modern web API instead, one that shows a lot of promise.

Why is it more modern? It uses JSON, which is a big deal. They used to use SOAP as the protocol to transfer data from the server to a mobile device, but it looks like they want to migrate away from that, and with good reason.

Reasons that I won’t go into here, you’ll find many rants / articles all over the internet.

However, having 2 active APIs (REST + SOAP) will most likely put them — from a developer’s perspective — in a bit of an awkward situation since they now have to maintain two APIs.

So sit back, grab some coffee and let’s take a look!

The first thing we will want to do is try and capture the API endpoint, a straight-forward task.

Upon opening the website I can clearly see an XMLHttpRequest (XHR) going to their server, which is coming from an AJAX request from somewhere inside their JavaScript codebase. 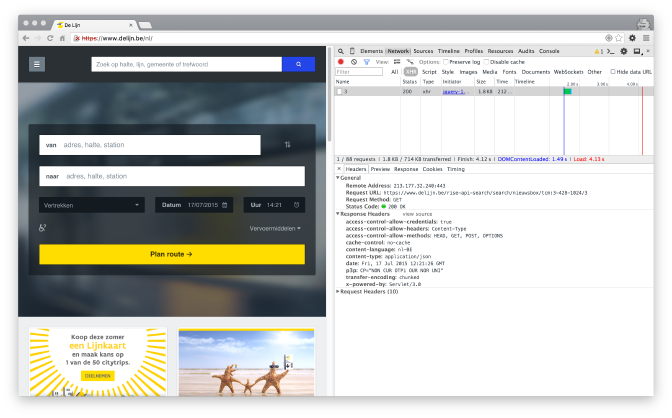 We can immediately spot one of the API endpoints that are used for their new API:

However, there is a second — more interesting — API endpoint which you can find when using their route planner. 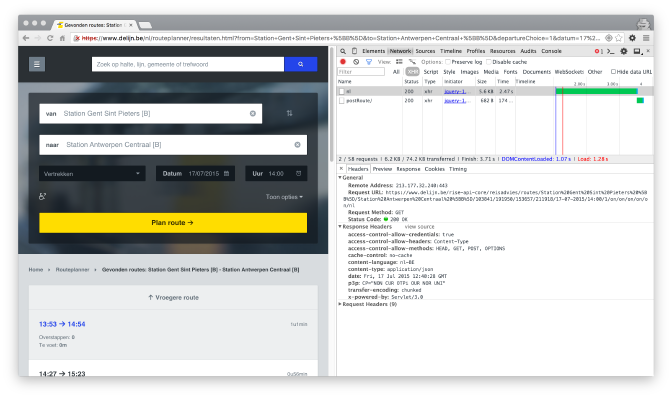 A few positive observations can be made:

And a few minor annoyances can also be found:

And one last mysterious observation when retrieving the latest news articles:

What is that mysterious tcm value? Honestly, I’ve never seen anything like it before and removing the tcm parameter will yield a 404 Not found.

Upon further inspection, the tcm value appears to be the “news category”, which I could extract from their source-code.

And the value is actually inserted into the index page as such:

And changes depending on the language you selected on the website.

It’s odd to see an API that’s tightly coupled to the client (the web browser), not to mention the variables that are just floating on the main window object.

EDIT: Someone pointed out to me that “tcm” most likely stands for “Tridion Content Management”, the CMS that De Lijn uses to publish their articles.

Let’s take a look at how user authentication is implemented.

To be able to log in we’ll have to use a method that is not exposed in the API (yet?) so we have to post to a different url endpoint, the naming (and the server response) of the request makes me believe that they use auth4u, an authentication framework developed by a Belgian company.

The request is straightforward, note that we’re posting and it’s a url encoded form.

The response from the server however is what we actually want to see.

This tells a few things:

To authenticate requests tot the API, simply send over the session id cookies to the server along with the API request, although it’s fair to say that most API requests don’t require any sort of authentication anyway.

As always, I have some general remarks regarding the API as it currently stands. I’ll outline them here as best as possible.

Use the following route to convert lat/long to x/y: https://www.delijn.be/rise-api-core/locations/convert/{{lat}}/{{long}}

Which will give you the x/y coordinate in a response similar to:

In my opinion, they should just stick to using the familiar lat/long coordinates on the frontend and silently convert them to their x/y equivalents on the backend. That way the client doesn’t have to do an additional API request for the conversion and we can all work with data that we are most familiar with.

EDIT: A reader has notified me that these are most likely Belgian Lambert 72 coordinates.

Interestingly, when I change a few parameters in the API requests I get a SOAP related error which leads me to believe that they’ve written an API gateway to do the actual conversion from SOAP to a more RESTful interface. I hope this is a trend that we’ll see more in the future, out with the ugly SOAP interfaces and in with the modern RESTful APIs!

This might also positively influence their maintainability, but regardless it’s always a pain to maintain multiple APIs instead of one.

During the writing of this article, they seemingly switched to different API endpoints. They used to have only a single endpoint (https://www.delijn.be/rise-api-web/).

It’s possible that this is for performance reasons so they can load-balance their different requests, although they could have done it all the same without changing the old endpoint but this would have required a bit more configuration on their end.

For me personally, documentation is on my number one list of important tasks when building a new API.

Therefore I’d like to document all the routes and available parameters that go with them, but I’m not going to do so in this post so I’ve created a blueprint that can be viewed on Apiary.

You can check out the source code here (MIT licence): https://github.com/MichielDeMey/delijn-api

Or view the generated documentation on Apiary: http://docs.delijn.apiary.io/

Thanks! I’d like to thank my brother, Gilles, for helping me out with the documentation.